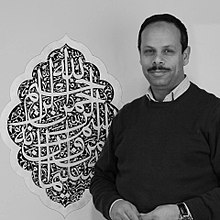 Professor Nasar Mansor is an artist, calligrapher, academic and designer in the field of Islamic Arts, specializing in Islamic Calligraphy. He is considered to be one of the most accomplished contemporary Arab calligraphers today.
Nassar is best known for his serious academic research on Islamic Calligraphy and for his academic and artistic efforts in reviving Muhaqqaq (one of the six classical scripts الخطوط الستة) as a successful artistic medium for contemporary Islamic calligraphers. Nassar was the first Jordanian to obtain the traditional Ijaza in calligraphy from the Islamic world's premier master calligrapher, Hasan Çelebi, in 2003, Istanbul. In April 2018, he was awarded The Artistic Creativity Award for his academic and artistic efforts in reviving Muhaqqaq script by the Arab Thought Foundation (ATF). 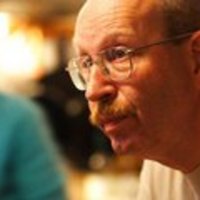 Thomas Milo (DecoType) linguist and computer typography pioneer specialized in writing systems and Arabic-scripted typography from Amsterdam, the Netherlands. He published many articles on the structure and history of Arabic script, notably on the scientific analysis of classical Arabic script which led to the introduction of the concept of script grammar. Distinctions: Nobel Peace Prize 1988 for participating in an armed UN peacekeeping operation - Unicode Bulldog Award 2000 for fundamental contributions to digital text encoding - Dr Peter Karow Award 2003 for exceptional and innovative contributions to the development of digital type and typography related technology. Major series of publications are produced with DecoType, e.g., the Library of Arabic Literature by New York University Press, and Arabic text of the famous Dutch Royal Brill academic Publishers. At the behest of the government of Oman, DecoType created the first digital Qur’ān as an interactive typographical art work.

Dr. Santosh Kshirsagar is a Design Educator and Calligrapher from Mumbai, India. With more than 2 decades of teaching experience , he is the current Dean at Sir J. J. Institute of Applied Art. In 2019, he completed his PhD on Handwritting Acquisition in Devanagari script from IDC, IIT Bombay.
He teaches Calligraphy (especially in Devanagari script), Typography and Visual Communication Design. He has conducted several workshops in India and abroad and has given illustrated talks on Indian Calligraphy in Germany, Belgium, London and Japan. His Calligraphic works have been exhibited in Japan with Prof. Mori Kooun, Australia and USA. He has presented his research papers at ICTVC (Cyprus), ATYPAI (Dublin, Ireland), International Graphonomics Society Conference (Japan). He has also designed Typefaces for Microsoft (Window XP) in Gujrati & Oriya scripts.
He is an academic consultant to government organisations and private institutions in India. He is on the advisory board of Typography Day from 2009. He is one of the Co-Founder of Aksharaya, a non-profit organisation dedicated to creating awareness about Indian scripts.

Samir Sayegh was born in Lebanon in 1945. He is a master calligrapher, art critic, poet, writer and researcher. He is the author of several publications on Islamic art, notably the book Islamic Art: a reading into its philosophy and aesthetic characteristics. He was a lecturer at the Architecture and Graphic Design department at the American University of Beirut from 2003 to 2007. He has exhibited his calligraphic work across the Arab world and in Europe, and has also created works for buildings and mosques.

The following are the accepted papers for presentation during the conference:
28th, 29th February and 1st March 2020
at The Applied Sciences University, Amman, Jordan.

Custom typeface as a written voice of the universIty
Alja Herlah, University of Ljubljana, Academy of Fine Arts and Design, Slovenia.........

When James and Leo want to tell us a story: The linguistic and typographic choices made by advertising agencies in Lebanon, and what they tell us about culture and design.
Joumana Ibrahim, Lebanese American University, Lebanon

Designing for Local, communicating for Global: Bilingual Typography and the Symbol of the new logo for the Cyprus University of Technology
EVRIPIDES ZANTIDES, UNIVERSITY OF CYPRUS, CYPRUS